Lead time 3-7 Days if you put in the order now.

Please allow 2-7 days to process your order. Enclosures are made to order. (not including Saturday and Sunday)

This project is our first joystick assembly. I had been meaning to switch to a crossup style for a while now from my cheap mayflash and decided to make the jump while also deciding that this would be a good time to leap into building my own; while understanding how joysticks work, and what ways you can customize them. It's been a great project and it's taught me a lot, but it (the crossup doubly so) has a few traps that weren't so apparent on project launch.

I chose the Gen 2 Extended layout.

The first mistake not realizing the extra space that the screwbuttons need. As I had chosen the Gen 2 layout, as I had wanted the buttons to be closer together to be easier to hit. The issue turned out that the rings were impossible to rotate onto the button due to the proximity of the holes. The rings were in contact with each other very tightly, so the solution we ended up coming up with was holding the ring to the hole, and screwing the button into the ring instead. You can see the contact in the first image. You don't have to worry if you use push buttons or get the layouts that have more space in between the buttons, and it is solvable anyway, but it's just something to keep in mind. Picture 1 has all of the buttons in without the wiring, notice the amount of contact that the plastic rings have. I have SEIMITSU-PS-14-GN-KN buttons for reference.

The other issue we've run into is in the wiring step. This has been a much bigger problem so to speak and my hope is that future versions of this case offer 16-18" enclosures and perhaps an inch extra inner height. Image 2 comes from our partial wiring step (although the perspective may make this difficult to gauge) illustrating why the extra height would come in handy. The 20 pin's plastic protection covers for the terminals don't let the wires bend/compress easily into the height of the case without worry of bending the button terminals. The other worry (perhaps biggest) and the reason that I hope that bigger enclosures are available is the front side panel buttons. You'll notice that my 24mm Seimitsu button in the top right of the case has the same black extended block that the terminals are hosted on just like the 30mm buttons of the case. The issue you're going to run into quick is because this is a *crossup* you have the 3 extra 30mm buttons on the face panel; the terminals from the 2 buttons in the front top panel are going to hit the right movement terminal block of the top row of 30mm movement buttons. Wiring them (Select and home) and not bending the pins seems incredibly difficult using the 20 pin connector. This obviously wouldn't be a problem in a similarly designed standard stick (I'm assuming this enclosure is based off the many standard enclosures that Eternal Rivals provides). The extra case height I proposed earlier may have solved both problems for my buttons, but if there's another style of button with an even bigger terminal, you'll want a bigger case. We're still debating how to proceed past these 2 problems in our build currently.

One last rather minor wiring problem is that if you use a 5 pin hitbox style conversion for the movement buttons (ie: https://arcadeshock.com/products/jlf-5-pin-to-stickless-conversion-cable?variant=40021592653) you'll likely have to cut the zip ties due to how far jump is compared to the rest of the movement button, and ground won't reach. We ended up using the last movement ground for a face button and used a face button ground from the 20 pin to ground the jump button. 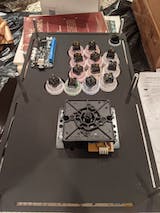 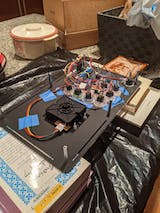 I wanted to build a crossup and came a cross eternal rival, not only did they customize it by adding a hole for my cable output(non neutrik) their customer service was always quick and responsive! Definitely worth the price!

Brook: PS3/PS4 Fighting Board Plus

Brook: PS3/PS4 Fighting Board Plus

Brook: PS4+ Audio Fighting Board and UFB UP5 Combo